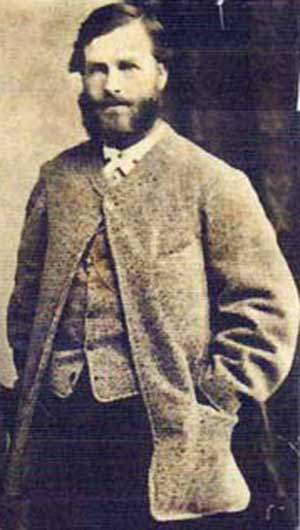 My great great grandfather, then Captain Ewen Macpherson of the 78th Regiment, married Catherine Gunn on the 30th August 1827 in Colombo, Ceylon.

Their first three daughters, Anne Brodie Catherine, Mary and Margaret and two sons, Ewen Fergus, b: 17th July 1834, and my great grandfather, William Gunn, b: 18th June 1836, were born at or near Kurunagulla, Ceylon.

The family returned to England.  The next son, James John was born, 10 th February 1839 in Fort George, Scotland. Ewen transferred as Captain to the 99th Regiment, acting as escort to 201 convicts being sent to Hobart, on the ship “Isabella Watson”.

Over the next 94 days, there was a mutiny by 35 or so convicts near the Islands of Feroe.  The fourth son, Daniel Grant was born at sea, 3 weeks out from Hobart, on 18th July 1842. Imagine Catherine looking after 6 children for that voyage. The family then lived in the vicinity of Sydney. 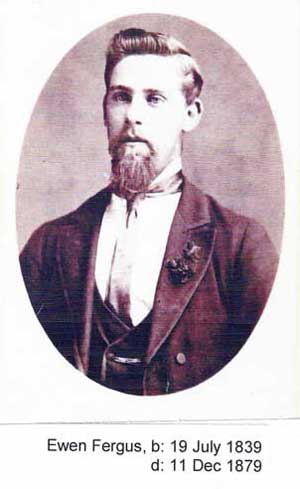 My great grandfather, William Gunn, first visited New Zealand as a 17 year old with the husband, Alfred Cox, of his sister Mary. They landed 43 cattle out of 130, 560 sheep out of 780.

Alfred Cox returned to Fiji in April 1858 with his family, and William Gunn and Daniel Grant, who worked as stockmen on Alfred’s large property, Raukapuka Station, Geraldine, from 1858 to 1861.

William would certainly have known of the very successful Captain Alexander Barrack, who in 3 trips between Australia and New Zealand with 64 horses each time, lost no animals

William then was manager of the big Ida Valley Station, in Central Otago from 1861 to 1867.  He his brother Daniel and their mother bought the Tekapo Station. They lost all their sheep in the big snow storms of 1867, 1868. My great grandaunt Ida, remembered being housebound for 6 weeks as a 5 year old, the snow being over her head. 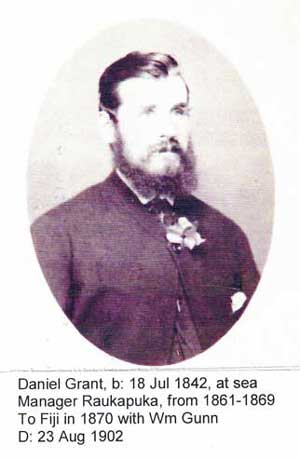 The story of Captain Alexander Barrack is well told in his life history by David N Atkins, “30 Years in the Pacific”. Capt Barrack had brought his family on the “Van Tromp”, 1861/1862 to SomoSomo to set up a coconut oil mill for Campbell & Co.

He didn’t like the anchorage, so moved to Daku, SavuSavu, buying land there.

The hot springs belonging to Adi Ramese Alewa, a redoubtable lady, who, in 1863, led her people in battle at Eroi, was captured with 16 men, eaten by Tui Wainunua and his people, (cooked in the springs.  Ref: C.F. Cummings book)

”in the SavuSavu area, TUI Nasavusavu, constantly at war with his neighbours made away with land to obtain arms.”

As a result of the American Civil war, cotton prices were high in 1869 (79% of the export from Fiji).

In Feb 1870, Capt Barrack sailed from Daku to SomoSomo to look at land and Cotton plantations.  He bought new cotton knife gins and seed for the SavuSavu planters 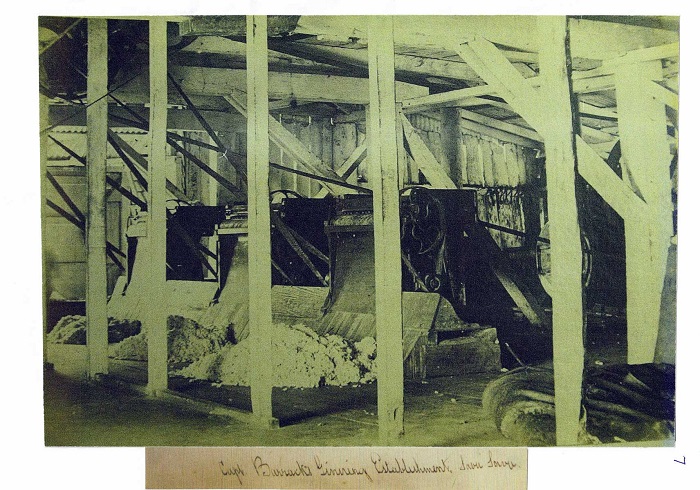 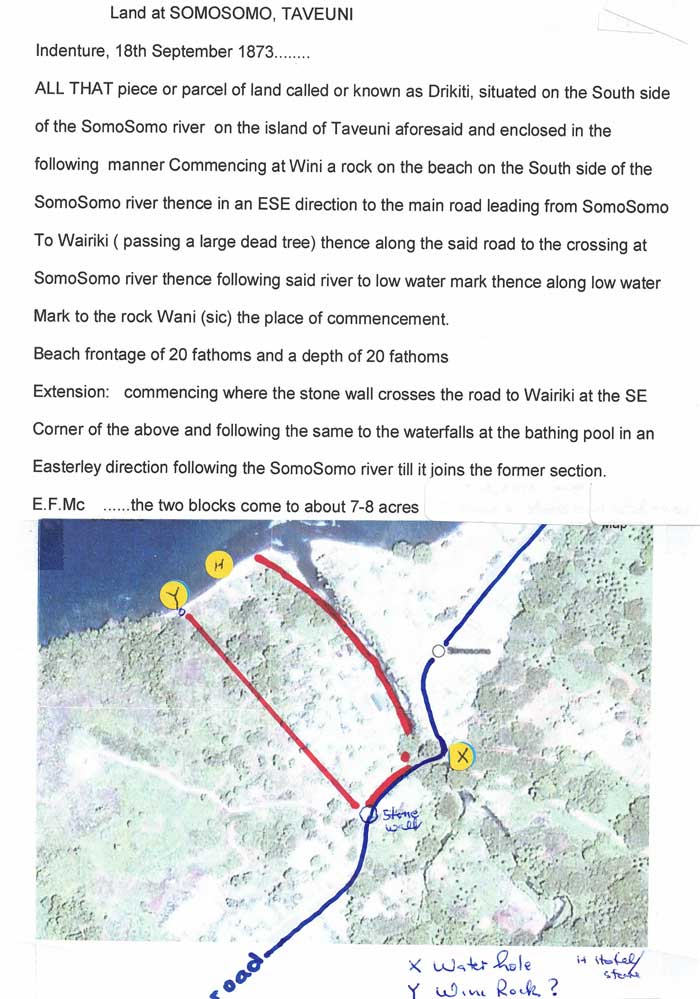 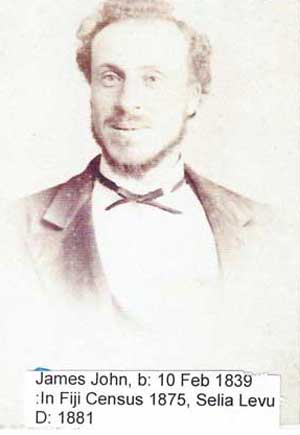 The Fourth brother, James John was also in Fiji in the early 1870s, at Koroni, Selia Levu. He later drowned at Vuna Point, Taveuni in 1881.

Ratu Goleanavanua, 8th Tui Cakau, would have sanctioned the above sale.  He also married his 11th and last wife, Adi Ciba (probably from Lomonivonu) about this time.

The high prices for cotton crashed in 1872, the result of the Franco-Prussian war, the price dropping from 54d to 16d per pound.  Many cotton plantation owners were ruined.

William Gunn and his wife Sophia AND Ewen Fergus settled at Waiyevo, with a store, hotel and dwelling houses at SomoSomo.  Young William went to school in Sydney January 1874, his sister back to Temuka in New Zealand.

As SomoSomo was approached, the country became ,more stony and rugged, presenting the appearance peculiar to volcanic regions, until the locality of Mr Macpherson’s hotel was reached.  The face of the country is more pleasant, the land appears more prolific, and the water by a large creek maintaining a clean, flowing stream all year round.  At Mr. Macpherson’s, I found a very comfortable, cleanly lodging and a table well provided with wholesome and inviting articles of food, properly cooked and served. In short I met with comfortable convenience, combined with moderate charge and civility.”

In November 1875, Ewen Fergus applied for land at Bucalevu, 200 or so metres from Lomonivonu village and started arrowroot production.  He was drowned in the hurricane of December 1879 at Nadi, his boat, the Byron, sinking and two crew drowning.

Daniel Grant was at Bucalevu in 1881, at Wainunu, Buca Bay 1888 then disappears from records. He exhibited at Sydney and London in 1881, a parcel of pure Bermuda arrowroot on Ewen Fergus’s behalf, obtaining first prize. 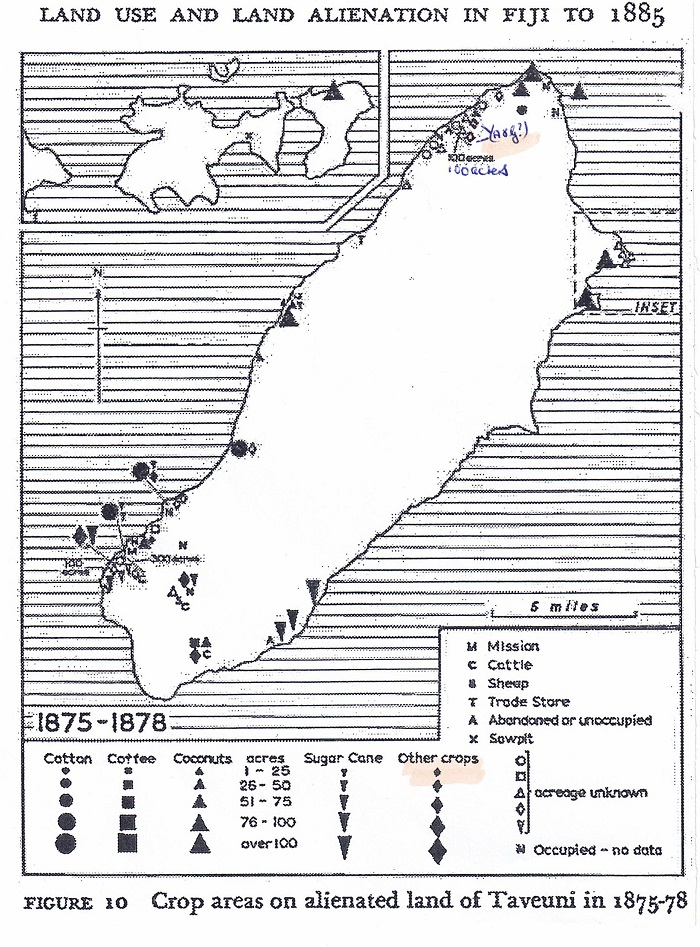 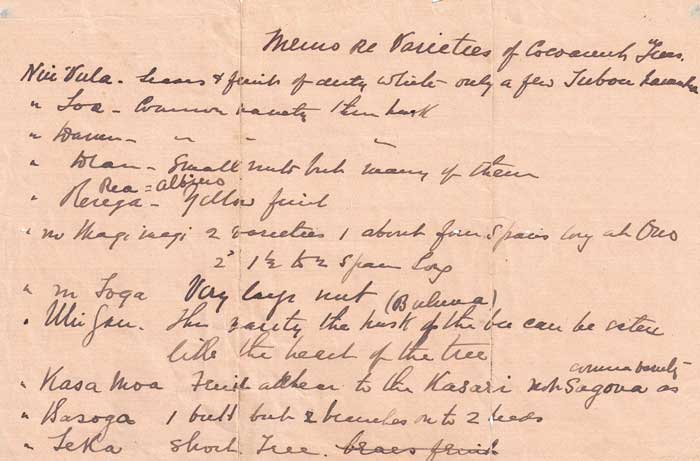 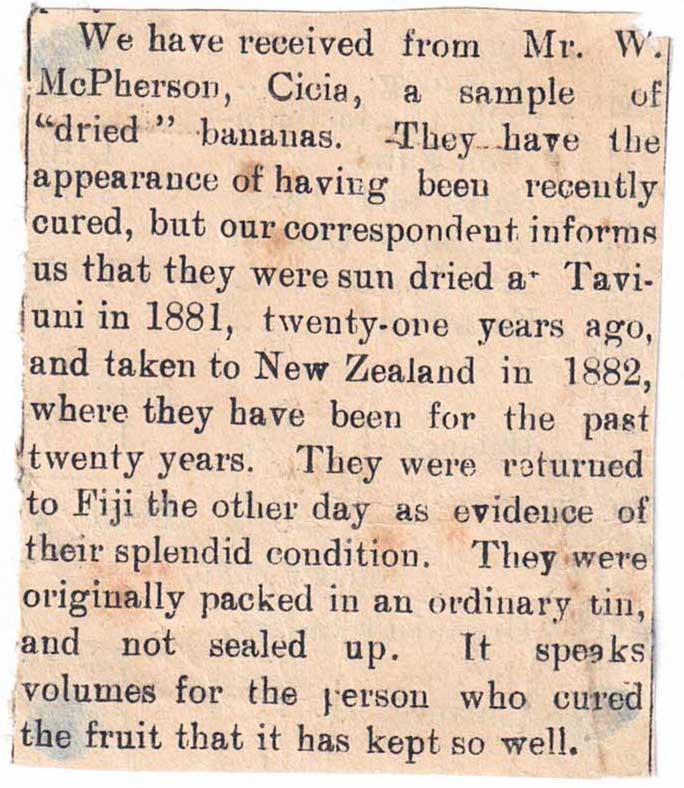 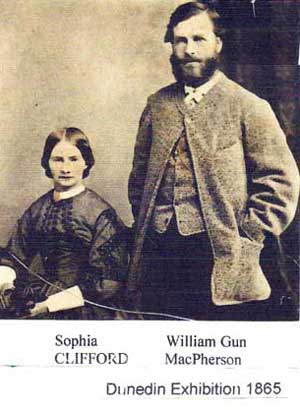 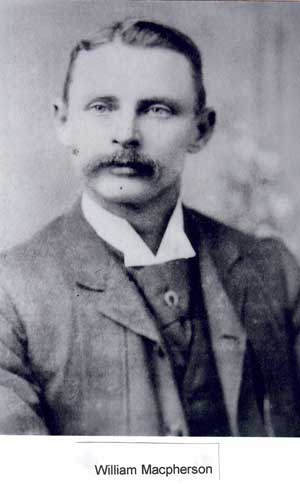 In 1878, young William Macpherson, my grandfather, returned from NSW and took up a position as Overseer for Messrs Harris & Clere, subsequently serving 11 years with Mr J.E. Mason on his Alpha estate and also his Gila Tea Estate, about 2 miles from Bucalevu and Lomonivonu.  Tea grown here (True Pekong Souchong) was exhibited at the Colonial Exhibition in London, with success.

Surely on a visit to his Uncle Ewen at Bucalevu, he would have met the young widow, Adi Ciba, as Ratu Gole had died in 1879.  Adi Ciba had 3 children with him, half-brothers and half-sister the next Tui Cakau( 9). I have been told that the two children she had with William Macpherson, Kini, born 1888/9 and Adi Maria born in Cicia, 1892, were recognised as being connected to Tui Cakau (9)

William married Adi Ciba, in the early 1880s, Sophia lived with William in 1882 on the Gila estate and went with William, Adi Ciba & Kini to Cicia in 1889 where he became Acting Overseer / Store manager of the Cicia estate of J.M.Barron. Their daughter, Adi Maria was born in 1892 on Cicia. 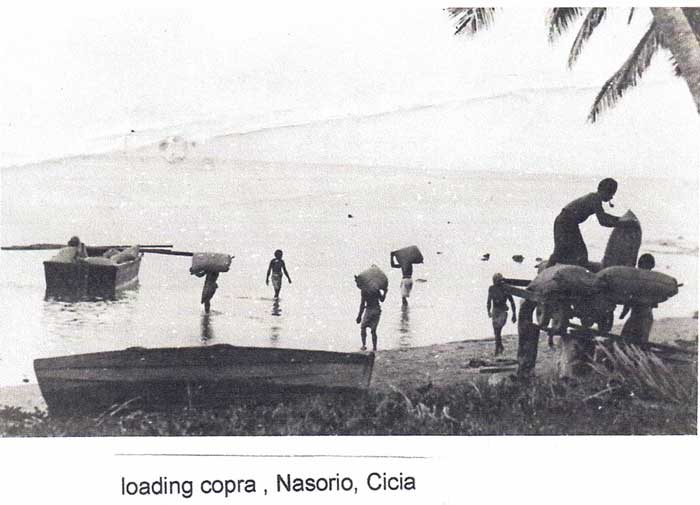 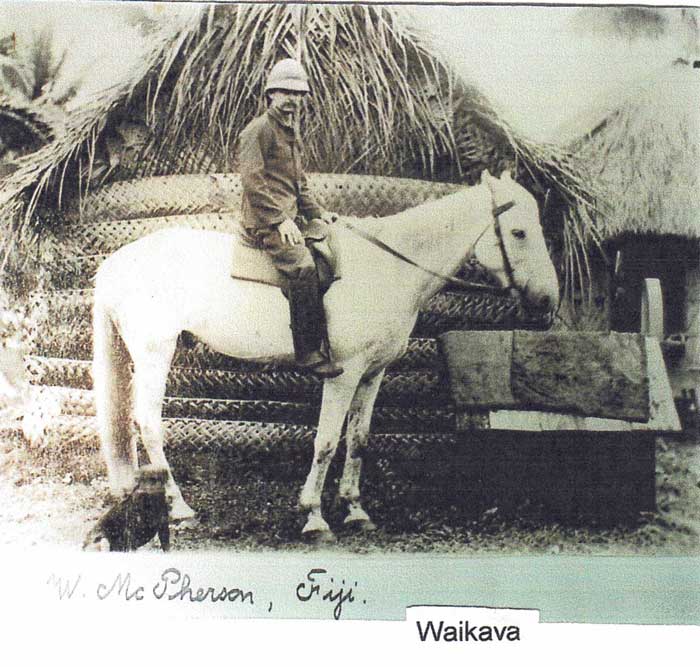 Adi Ciba died ca 1896.  Significantly, a 20 year old, Adi Tapanisi Sauvacavanua, (a possible relative of Adi Ciba) visited Cicia in 1896/1897 meeting the 20 year old Jack Taylor, Overseer of the Mago estates for J.M.Barron.  They were married in 1898 and lived at Udukacu estate, Taveuni.

William married my grandmother Sarah G Eyton in Palmerston North, NZ in 1897 , the two meeting for the first time, the day before the wedding.  Their daughter, Ida Jean, born 1898, Reginald and Arthur (all born in Suva) arrived during this stay on Cicia.  Sophia Clifford died at Nasorio, Cicia in 1906.

In 1910, William took up a lease at Waikava, Fawn Harbour, just a few miles from Waikava Island where Ratu Gole had died in 1879.  My mother worked in SavuSavu in the early 1920s, staying at the boarding house of Ossella Barrack, my father’s mother. Ida and Graburn Stanley Barrack were married in Suva in 1927.

The severe storm of 18 September 1917 was so bad, that the “Sea Raider”’s, captain Count von Luckner put into Waikaya Island for shelter.  Young Kini Macpherson showed commendable courage, putting to sea in the treacherous conditions to take the news to Levuka. This daring, played a large part in the capture of the Count von Luckner.

Unfortunately, like other families, my grandfather William lost most of the family records in the severe hurricane of January 1912.  Sadly, I know little of my step-grand-mother, Adi Ciba.  She must have been a beautiful women, the pictures of her son, Kini’s, daughters Ella, and Ida are so remarkably like my sister Helen, their half –cousin, ( very good looking ladies).

If she is the widow of Ratu Goleanavanua, then she led a remarkable life, lived through the horrendous measles epidemic of 1875, and the rebellion of the young women in Cakaudrove soon after.  Hopefully someone will be able to add to the stories I have been given.